These Sovereigns, known as the Queen Victoria Young Head St George Reverse, feature a young bust of Queen Victoria with a braid in her hair on the obverse and St George slaying the Dragon on the Reverse. These sovereigns were produced from 1871 to 1887.

They are the first Australian sovereign to feature Benedetto Petrucci’s now legendary depiction of St George slaying a dragon which is now a common sight on sovereigns from Mints around the world. These sovereigns were only produced in Melbourne and Sydney mints between 1871 and 1887. 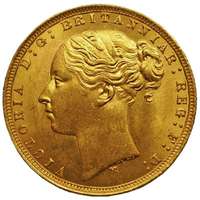