The Chinese Gold Panda is the official bullion coin of the People’s Republic of China.

As China’s first gold coin, the Gold Panda is extremely popular.   First issued by the Chinese Mint in 1982, the popularity of these coins continue to grow as the wealth and influence of China rises - not to mention, the designs also happen to be adorably cute!  During their first year of release, the Gold Panda was also acknowledged as “Coin of the Year” by the ANA (American Numismatic Association).

The Chinese regard the Giant Panda as not only a national symbol of China, but also as a symbol of friendship and peace.

Much like the Australian Kangaroo coins, the Chinese Pandas are unique in that their designs change every year, making them popular among investors and collectors alike.  While the obverse design stays the same and features The Temple of Heaven’s most important building the ‘Hall of Prayer for Good Harvests’, the reverse depicts China’s iconic Giant Pandas in various playful scenarios against a difference background each year (except for 2001 and 2002, which feature the same designs.).  The Chinese Gold Panda was the first bullion coin worldwide to feature a different design on its reverse each year. With the Gold Panda’s legal tender status, the coin is trusted and recognised worldwide making them very easy to trade.

The desirability and global trust behind the Golden Panda's make them a great addition to any investor’s holding. 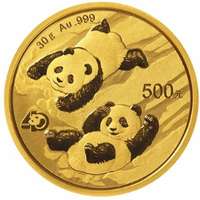