This gold sovereign was produced from 1820 to 1830 with 2 different styles of the coin commissioned. From 1820 to 1825 the effigy of King George IV was known as the "Laureate head". This was designed by the now famous Benedetto Pistrucci, the reverse featuring St George and the dragon was designed by Pistrucci as well. These 5 years of sovereigns are one of the few sovereigns that were completely designed by Benedetto Pistrucci himself. George IV sovereigns were changed mid-way through 1825 and King George IV’s Effigy was amended to feature William Wyon design of King George IV known as the “bare head” and the reverse was changed to contain a crowned ornate shield of royal arms designed by Jean Baptist Merlen. The sovereigns which are displayed below are the scarer kind, the "bare head" sovereigns and make a great addition for anyone looking to add a scarce sovereign to their collection! 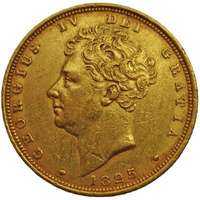 Very scarce in this quality
In Stock 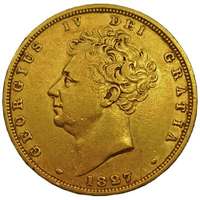 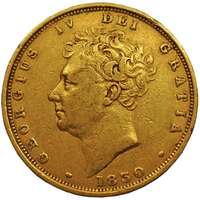